Hospital and health system leadership teams may look to partner with other organizations in an effort to gain capabilities for evolving care and payment arrangements. While many partnerships have been successfully completed in recent years, participants all too often indicate that their exploration, negotiation and integration processes could have been smoother, yielding more optimal benefits in a timelier manner. 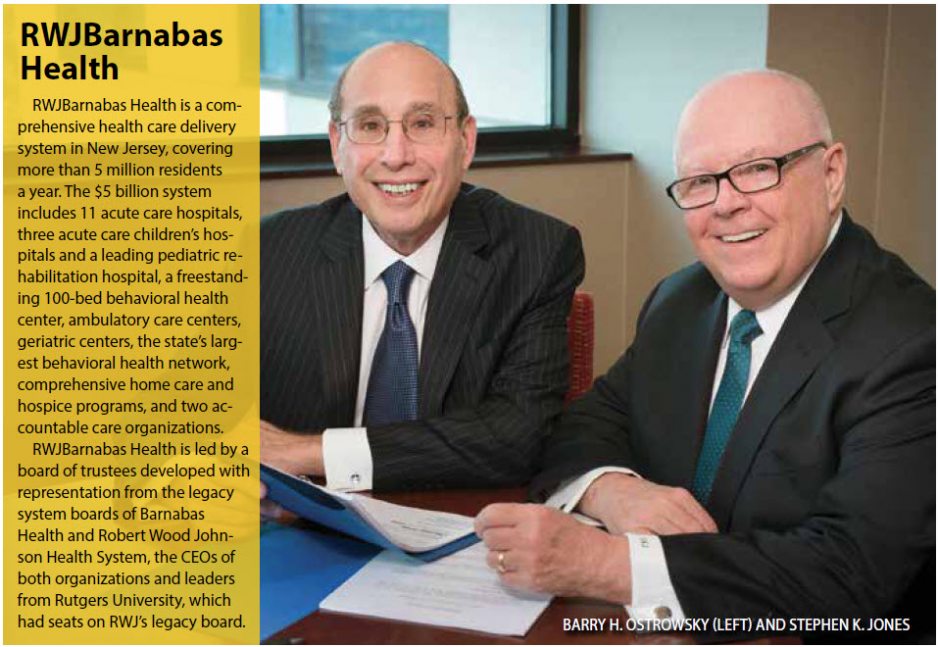 Trustees play a critical role in assuring the development of best-possible agreements that enable newly merged organizations to hit the ground running and achieve partnership goals and objectives. Two authors of this article, Barry Ostrowsky, of the former Barnabas Health, and Stephen Jones, of the former Robert Wood Johnson Health System, did just that, combining their organizations into RWJBarnabas Health in 2016. Here are six practices the authors considered “must do’s” for forging their successful partnership:

1. Develop a shared vision with guiding principles, goals and objectives

In the early part of the decade, the New Jersey health care market experienced rapid change, with for-profit and nonprofit organizations forming partnerships within the state and across state lines.

Following independent assessments of their individual positions and directions in this changing environment, both Barnabas and RWJ identified as a strategic goal the expansion of their health care missions to more communities in the Garden State. Each envisioned a partnership with another health system as the means to more effectively invest in communities and broaden the care they provided.

During their initial meeting, CEOs Ostrowsky and Jones realized almost immediately that their organizations’ objectives, cultures and attributes were complementary. They easily developed a shared vision that Barnabas and RWJ could better achieve the fundamental missions of population health, academics, research, charity care and service to diverse local communities by working together to deliver high-quality, affordable health care to the people of New Jersey and surrounding areas.

Based on this shared vision, the senior team developed and the boards approved specific goals and objectives that answered a basic question: Why should they partner? Nine core principles guided the partnership process and covered prototypical health care issues: alignment of strategic goals related to growth and support of the academic mission and centers of excellence; scale to achieve population health; commitment to continual im- provement in quality; operational effectiveness; strong culture and core values; a governance that continues to advance the mission; financial strength; physician growth and alignment; and strong brand and reputation.

The nine principles — in language unfettered by legal jargon — appeared on Page 1 of the definitive agreement between the organizations and formed the basis of strategies and a series of tactical plans included in the agreement.

2. Quantify a business case based on achievable synergies

Development of a business plan, with a thorough assessment of cost synergies, provided an understanding of the potential financial benefits that could be accomplished with a strategic partnership. The system-level assessment included income statement line items such as salaries, benefits, purchased services, drugs, medical supplies and back-office functions. The CEOs expected these elements to yield realizable synergies in the range of 5 to 7 percent of total operating expenses without layoffs. The savings would be reinvested in programs.

The leadership team considered the context of its mission, vision and values when interpreting the analytical findings. Decisions surrounding where, what types, and what levels of services were to be provided; relationships with academic affiliates; personnel strategies and commitments; and community relations all would shape the realizable opportunity. Organizational uniqueness among patient populations, external vendors and geographic footprint would impact the achievable opportunity. The systems’ long history of serving inner-city communities would be continued.

The organizations began to address their individual operational imperatives upon signing of a letter of intent to merge, working within regulatory guidelines. Entities within the organizations were expected to live up to stringent operating requirements to achieve results that would be needed to implement strategies in a combined system.

Since mergers can be distracting to leadership teams, the CEOs were concerned about underperformance of the partnering organizations while awaiting approval of the merger. When state approval of the merger still was likely a year away, leaders insisted that work begin immediately — the organizations shouldn’t wait for a grand plan to be constructed after the transaction closing.

Immediately after signing the definitive agreement, the leaders empowered a discrete Office of Integration and provided it with sufficient resources to begin work systemwide. Taking two big organizations and making them one could not be placed solely on the to-do lists of an existing set of executives.

The CEOs designated a dynamic executive who understood the scope of both organizations to work with the newly assigned integration office staff and the management teams — within regulatory guidelines — to prioritize and start realizing defined financial synergies. Local operations would be key to success, the CEOs believed, so frequent communication was required between the Office of Integration and local staff to connect the dots between what staff focused on every day and the combined organization’s objectives. A road map provided specific guidance to local management teams, which were intent on meeting operational imperatives in order to have the opportunity to pursue specific community goals.

A road map also guided the leadership team in gaining physicians’ buy-in to the intended merger. RWJ employed 150 physicians; Barnabas employed 1,000. The combined organization would include more than 9,000 affiliated physicians in total. So, there were meetings with every medical executive committee at each of the hospitals. The CEOs attended general medical staff meetings and organized small groups of clinical chairs to describe the partnership rationale and the opportunities to provide increased support to the academic and research physician enterprise.

The employment model would be offered to physicians, but so would other ways to assist physicians in engaging with the organization. The CEOs made it clear that they did not have a preconception as to alignment approaches. Key to these conversations was that they were not rushed. If additional conversations were needed, they took place.

5. Establish an enterprise-level board while retaining local governance

Before receiving state approval for joint operations, each organization selected an equal number of trustees for a board of the new holding company.

Even though the board had not yet been granted legal authority to manage the assets of the combined organization, its members nonetheless held four meetings so they could start talking and thinking jointly. Socialization occurred throughout an eight-month period, with meetings, tours of facilities, retreats and other activities.

The enterprise-level governance team recognized that retaining the existing boards of local hospitals would be critical to the merged organization because local boards understood specific needs in their communities and could apprise the enterprise board of progress toward meeting these needs. Attrition from local boards did not occur. In fact, quite the opposite happened: Many community members asked to join a local board because the local hospital was now part of a larger organization.

6. Allow an organic definition of a new management structure

To gain the maximum benefit of executive strengths in the combining organizations, the system-level board endorsed a nonprescriptive structuring of the new management team. Two division presidents would direct acute and nonacute services in two geographic “pods” with approximately the same population and revenue, crossing legacy organization service areas. Equal representation of senior management from each organization would not be required.

Approximately a dozen senior leaders, not including hospital CEOs, joined the Office of the President. They determined responsibilities among themselves, without detailed job descriptions. This required individuals with good will who bought into the partnership goals and were not overcome by transaction anxiety. The leaders gravitated to roles that interested them, at which they excelled and that made sense as part of an enterprise operational management team. It wasn’t necessary for two individuals to share one title, such as co-chief financial officer, because the leadership decision was easily made by the executives themselves.

Attrition from local boards did not occur. In fact, quite the opposite happened: Many community members asked to join a local board because the local hospital was now part of a larger organization.

Because Barnabas and RWJ were both strong organizations that had completed thorough integration planning, they hit the ground running as a combined organization in 2016. Effective in January, the notions of legacy Barnabas and legacy RWJ went away, with equal responsibility for assets assumed by all leaders. Serving in one organization directed by one management team, leaders could design the system for a future under the population health management paradigm.

Increased scope and scale would allow for investments in the social determinants of improved health in local communities. For example, working with Rutgers University, a comprehensive sports medicine program would serve Rutgers athletes and students as well as communities throughout New Jersey. Scale also is enabling the organization to prepare in earnest for the prudent assumption of clinical and financial risk as health care moves to a value-based business model. The payback for RWJBarnabas Health in its ability to play a major role in assuring healthy communities will occur for generations into the future.