Coming to a State Near You: The Medicaid Crunch 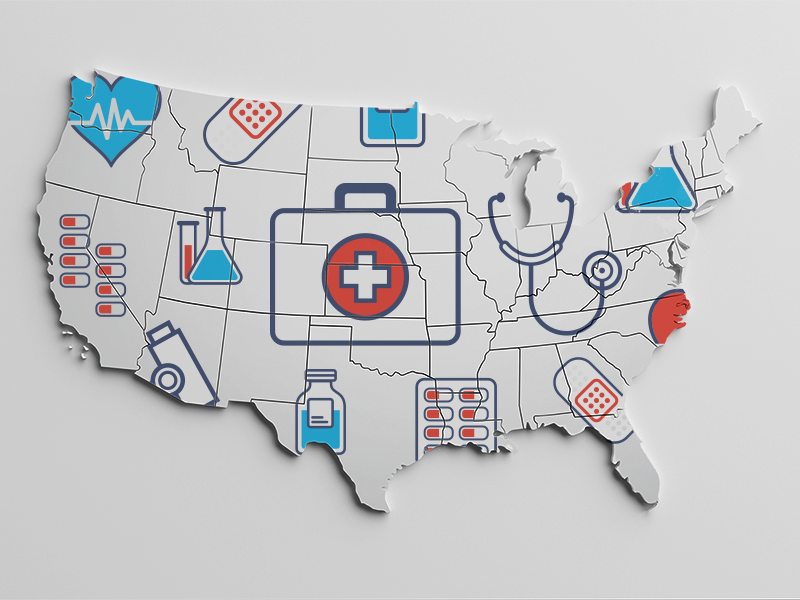 These projections for increased Medicaid enrollment and spending may run up against a hard barrier: state budgets. At 28.7 percent of total state budgets (all expenditures states make from combined state and federal funding sources), Medicaid represents the single largest state budget item, well above primary and secondary education (19.6 percent) and higher education (10.5 percent), the second and third largest budget items. As such, Medicaid has become a target for spending cuts.

With a large percentage of Medicaid spending flowing through state budgets from the federal government, hospitals and health systems may feel that they dodged a bullet last year when attempts to repeal the Affordable Care Act—and make drastic cuts to Medicaid spending—failed. But the current administration and a majority-Republican Congress are still seeking ways to reduce Medicaid spending. Financially distressed states also are looking at how funds for Medicaid spending can be diverted to meet other budget needs.

Tightening the Vise on Provider Taxes

To help ease the burden of Medicaid spending, states have turned to provider taxes as a favorite vehicle for increasing their share of federal funds. As of 2016, every state except Alaska had at least one provider tax, and two-thirds had three or more such taxes. The logic behind provider taxes is simple: levy a tax on providers based on a percentage of their net patient revenues, use the money generated by the tax to increase Medicaid matching funds from the federal government, and then return the money to the providers in the form of increased Medicaid spending. This logic is coming under pressure as the federal government seeks to rein in Medicaid program spending and states look to provider taxes as an attractive source of revenue to plug other budget gaps.

The federal government requires that states follow certain requirements when implementing a provider tax, including that states cannot hold providers harmless from the burdens of the tax. There is, however, a safe harbor for the “hold harmless” provision. As long as a state provider tax does not exceed 6 percent of net patient revenues, providers can be “held harmless” by a tax scheme that returns tax revenues to the providers through increased Medicaid spending. As providers in financially distressed states are learning, the promise of a safe harbor is far from certain.

In New Hampshire and Connecticut, hospitals have lost millions of dollars when provider tax revenue was used to fill state budget holes. New Hampshire hospitals successfully sued, claiming that a tax that singled out hospitals without taxing ambulatory providers of similar services violated equal protection guarantees in the state constitution. But a proposal in the state’s last legislative session offered a way to work around the ruling: make the tax applicable to all healthcare providers. Connecticut imposed a provider tax in 2012, with the promise that the money would come back to providers, enhanced by increased federal matching funds. The state quickly realized that the tax funds could help balance the state budget. In FY2012, Connecticut hospitals paid $349.3 million in provider taxes and the state appropriated $399.5 million to hospitals in supplemental payments. By FY2016, hospitals paid an estimated $556.2 million in provider taxes and expected to receive $164.3 million in supplemental payments, a deficit of almost $392 million. The provider tax has become a true tax on hospital revenues.

At the federal level, legislators have proposed scaling back the hold-harmless threshold to reduce Medicaid spending, a change that would affect many states with a provider tax. The Better Care Reconciliation Act of 2017 (BCRA) would have reduced the allowable threshold for the hold-harmless safe harbor from 6 percent to 5 percent; 28 states have a least one provider tax of more than 5.5 percent of patient revenues. The Congressional Budget Office estimated that this would have reduced the federal contribution to Medicaid budgets by $16 billion between 2017 and 2026. If the allowable threshold had been reduced to 4 percent, $40 billion in federal spending would have been saved during the same period. BCRA failed to pass, but the idea—less controversial than converting the Medicaid program to block grants to the states—may resurface, depending on the outcome of this year’s midterm elections.

If the hold-harmless threshold were reduced, states would have two options. First, they could preserve federal matching funds by either raising general revenue taxes or making cuts in other budget areas to fund the state’s Medicaid portion; neither is a politically attractive option. Second, they could make cuts to the Medicaid budget, which would also reduce the federal match. Both beneficiaries and providers would suffer under this scenario.

Changes to provider taxes are not the only threats to hospitals and health systems:

The takeaway is clear. Medicaid is and will continue to be a target as states come up against difficult budget realities and the federal government supports their efforts to curtail eligibility and spending.

Taking Up the Challenge

Hospitals and health systems face a double squeeze: a continuing reliance on provider taxes to fund state Medicaid programs, with no guarantee of seeing their tax payments returned, and the prospect of reduced Medicaid payments, a greater number of uninsured patients, or both.

Providing care to the most needy and vulnerable is central to the mission of not-for-profit healthcare. Fulfilling this mission in the face of both real and potential challenges to the Medicaid system will mean serving more for less. This will add to the burden not-for-profit hospitals and health systems bear as they encounter growing pressure from new competitors free from the obligations of mission. The necessary response goes far beyond incremental efforts to preserve margins. It will require difficult and fundamental changes to care delivery that can serve the needs of Medicaid beneficiaries and the low-income uninsured without draining the organization’s resources.

A relentless focus on costs and efficiencies is a first requirement. This focus must be matched, however, with a thorough and open examination of how, where, and by whom care for this population is delivered. As, for example, states use MCOs to push risk down to the provider level, new care delivery models and new sites of service will be required, as well as a willingness to experiment to find the right mix of providers to address patient needs. Hospitals and health systems may well need to look beyond their walls for inspiration, seeking partnerships with federally qualified health centers, social service agencies, and other organizations experienced in serving needy and vulnerable populations.

Hospitals and health systems that take up the challenge of preparing for the coming Medicaid crunch may reap benefits that extend beyond their ability to serve the needs of the Medicaid population. A broad range of healthcare services face challenges posed by mounting competition from non-traditional healthcare providers that can offer greater convenience and lower costs. Legacy organizations that can provide care efficiently and affordably to the most needy will be well positioned to make the broader changes needed to address these challenges.